I am seriously in love with Angela Liddon’s website (http://ohsheglows.com) and The Oh She Glows Cookbook. As a committed meat eater, I was surprised how great these vegan (no less!) recipes are! Her recipes are creative, flavourful, and she makes veganism really approachable. I really recommend her cookbook! It’s a must have for any clean eater- vegans and carnivores alike!

That said, I did spill some meat on my vegan cookbook.  Hahahaha! True story! I made one of her fabulous salads from the book but I paired it with carnivore mainstays of steak and potatoes!

Sunday kinda felt like spring- the sun was out, birds were singing and the streets were all slushy. I went for a run with my dog Boyd. It was my first run since last summer. It felt amazing to be exercising outside in the glorious fresh air!  What an incredible difference it is to exercise outside! I work really hard at my strength training classes but boy was I tired after that run! I think the fresh air did me in! Boyd was pretty tired too! 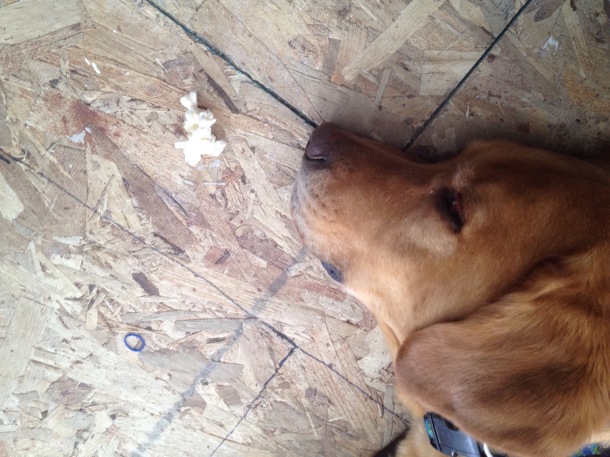 He was sleeping so hard, he didn’t even notice this popcorn fall right in front of him. Anyone who owns a Lab understands how crazy this is!  (Isn’t my subfloor soooooo pretty? Renovating is a long process!)

Not only was I tired, but I WAS STARVING by dinner! I wanted MEAT!!!! And I wanted the meat to taste like summer so I marinaded steak (which we broiled since our BBQ is buried under a foot of snow). I put some potatoes in the Actifry.  I was surfing Pinterest for a kale salad to try. I came across this salad, which is from Oh She Glows! It sounded amazing so I tried it. It’s called The Best Shredded Kale Salad. You probably have everything on hand to make it EXCEPT the nutritional yeast.  Nutritional yeast can be found in any major grocery store (any that has a natural food area or sells the Bob’s Red Mill products) or Bulk Barn. Nutritional yeast is full of protein and B vitamins and its used in lots of vegan recipes since it kinda tastes like cheese.

For the salad and the dressing:

For the Parmesan pecans:

You can find the recipe at ohsheglows.com

A word of caution about the Parmesan Pecans. I used my small Ninja blender to chop the pecans and mix the pecans with the oil and the yeast BUT I think the blender was too powerful since I ended up with pecan butter! Yummy but a little difficult to top a salad with. 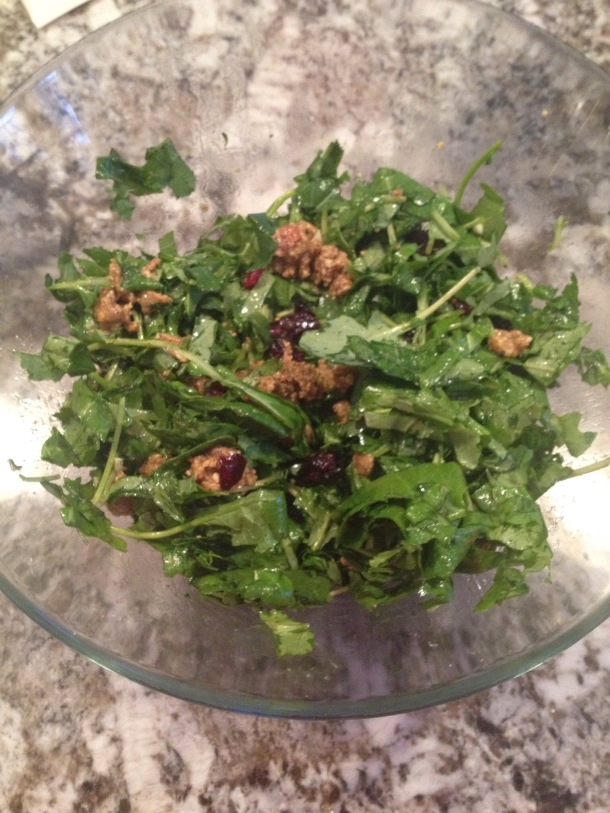 I served the kale salad with steak. There is something about kale that makes it pair so perfectly with steak!

We loved the salad so much there were no leftovers! The next night, I made a similar salad from the cookbook to go with the leftover steak. It’s called Festive Kale Salad with Sweet Apple-Cinnamon Vinaigrette & Pecan Parmesan. Very similar to the first salad I made, but there was apple and cinnamon! So great!

Very pretty salad!  Buy the cookbook and don’t be afraid to spill some meat on it!